We receive compensation from the providers of the services and products featured on this website. This impacts the offers’ positioning, rating & scoring. Advertising Disclosure
ON THE PAGE
Mar 25, 20227 min read

Rectal bleeding is an important symptom that shouldn’t be overlooked. There are many different conditions that can lead to rectal bleeding, and it’s important to be able to recognize when you may need to seek medical assistance.

Some of the causes of rectal bleeding include:

Chlamydia, caused by Chlamydia trachomatis, is another common STI that can affect the rectum. In fact, according to an interesting fact published by Clinics in Colon and Rectal Surgery{: target="_blank" rel="noopener"}, co-infection with chlamydia and gonorrhea is common.

HPV is a virus with many different strains. Some strains are high-risk for many different types of cancer, whereas others are more likely to lead to warts, which can affect the anus.

Other STIs that can cause rectal bleeding

The skin and mucous membranes of the anus and rectum are very delicate, since they don’t typically stretch much and can’t produce their own natural lubrication.

Inflammatory bowel disease (IBD) encompasses Crohn's disease and ulcerative colitis. These diseases cause chronic inflammation of parts of the digestive tract, which can manifest through bloody diarrhea and rectal bleeding. According to the Mayo Clinic{: target="_blank" rel="noopener"}, other symptoms can include unintended weight loss, fatigue, and abdominal pain and cramping.

According to the Cleveland Clinic{: target="_blank" rel="noopener"}, hemorrhoids are veins inside the rectum that can become swollen and enlarged. When this happens, hemorrhoids can protrude outside of the anus, and cause pain and rectal bleeding.

Hemorrhoids can also cause: 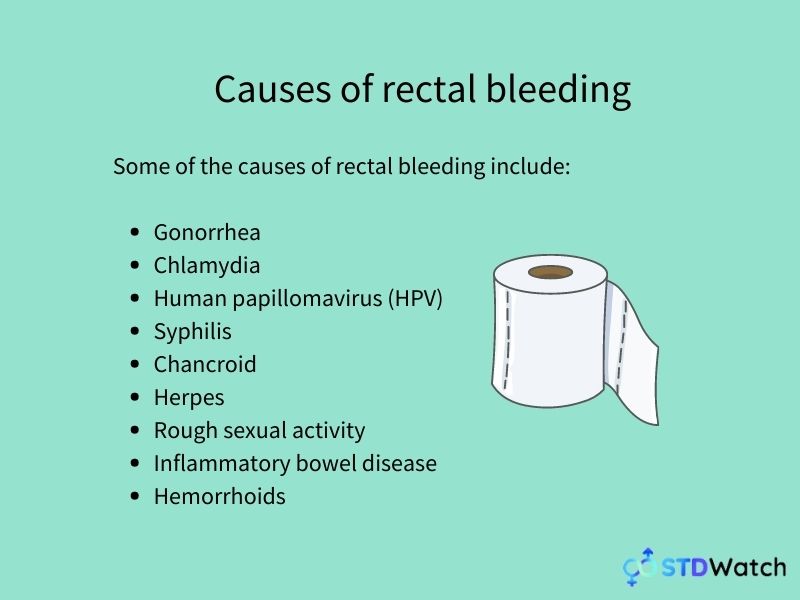 When to go to the doctor for rectal bleeding

But if you have experienced any accompanying symptoms, or your bleeding doesn’t resolve, it’s time to call your doctor. Your healthcare provider will be able to provide an accurate diagnosis and prescribe the treatment that you need to prevent complications.

The treatment for rectal bleeding will depend entirely on what is causing it, which is why it’s so important to get an accurate diagnosis from your doctor.

Gastrointestinal issues, such as inflammatory bowel disease, are typically managed through a combination of diet and medications. Hemorrhoids can be managed through lifestyle changes and topical medications, although severe cases can require surgical treatment.

STIs that cause rectal bleeding are also treated with antibiotics. Keep in mind that the right antibiotic therapy will vary depending on which is the pathogen causing the infection — you should never try to self-medicate if you suspect that you may have an STI.

If your doctor prescribes antibiotics, it’s important to complete the full course of the medication according to their instructions. Cutting your treatment short could lead to a recurrence, and it can also increase antibiotic resistance.

Warts caused by HPV, specifically, can be treated using prescription topical creams. According to the Mayo Clinic{: target="_blank" rel="noopener"}, they can also be removed using different methods, including freezing them with liquid nitrogen (cryotherapy), electrocautery, laser, or surgical excision.

More from the Health and_Wellness category