Syphilis Symptoms for Every Stage of Syphilis

Syphilis symptoms aren’t always easy to spot because the signs can be so subtle, the first stage of syphilis, which is also known as the primary stage may present as a painless sore, also known as a chancre.

Before we dive in, let’s do a little recap on syphilis.

Syphilis is a bacterial sexually transmitted infection caused by bacteria treponema pallidum. It is most commonly spread through sexual contact.

Syphilis is often known as “The Great Pretender” because the symptoms can mimic or seem like another health condition.

Syphilis is common in the United States, in fact, in the last number of years, it has been shown that syphilis continues to be on the rise. Cases of primary and secondary syphilis increased by 11.2% between 2018-2019.

Want some more background information before diving into the symptoms? Read: What is syphilis?

Let’s get down to it and dive into syphilis symptoms and what you should be looking out for if you are concerned that you have syphilis.

Syphilis symptoms tend to be the same in men and women, in that the symptoms of syphilis usually present in the same way.

The symptoms you experience will depend on the stage of syphilis you are experiencing.

Syphilis is broken into four stages: 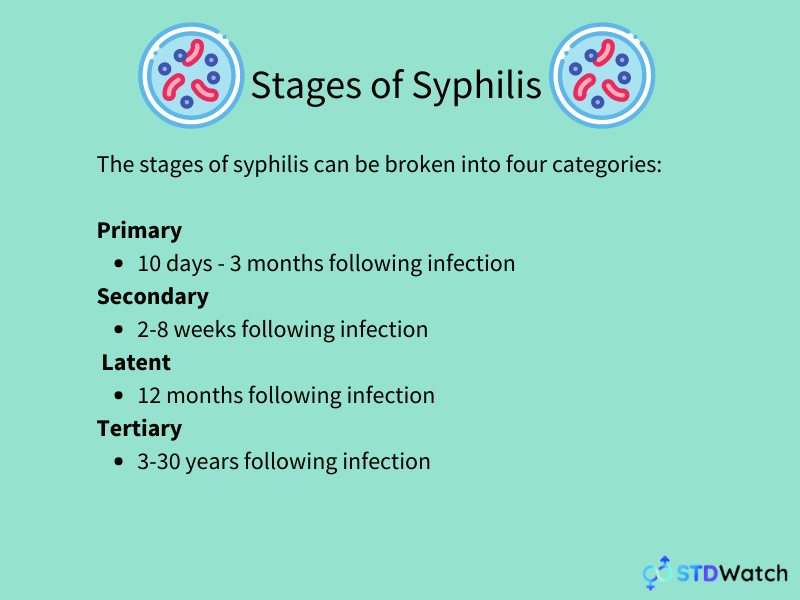 The symptoms of primary syphilis may include the development of a painless sore, also known as a chancre. Chancres are usually round in shape and firm to the touch.

Chancres may also appear on the anus, buttocks or upper thighs.

Usually the symptoms of syphilis will develop 10 days to 3 months following infection. The average onset of symptoms is 21 days. 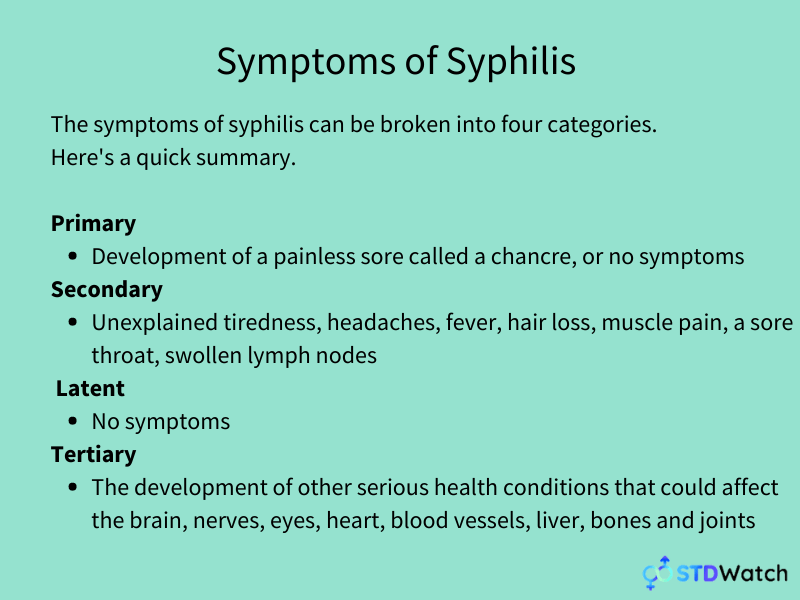 The rash is not always easy to notice, usually it doesn’t itch sometimes it can be faint in colour.

Some other symptoms of secondary syphilis include:

During latent syphilis, there are no symptoms, which means that it can continue to go undetected. Untreated syphilis in the latent stage can last anywhere between 3 and 30 years.

If you do not receive treatment during this stage, your syphilis will progress to the tertiary stage.

The symptoms of tertiary syphilis vary from person to person. During the tertiary stage, the bacteria have multiplied in one or more organs in the body. This means that the brain, nerves, eyes, heart, blood vessels, liver, bones and joints could be affected.

Some conditions that may arise from tertiary syphilis include neurosyphilis.

What is one of the first signs of syphilis?

A painless sore known as a chancre is usually the first sign of syphilis. This sore may develop on the head or shaft of the penis in men and the vagina, vulva and cervix of women.

The chancre may also develop on the buttocks, anus or upper thighs of both men and women.

How long can you have syphilis without knowing?

You could have syphilis for up to 30 years without realizing given that the symptoms can be so subtle. This is why it is so important to ensure that you attend regular sexual health screenings.

The symptoms of syphilis usually present in primary or secondary syphilis but as we have outlined, these symptoms can be difficult to spot.

Read: What is the best at home STD test?

What are the symptoms of late stage syphilis?

The symptoms of later stage syphilis may not be present. In the latent stage, there are no symptoms as the bacteria continues to multiply. In tertiary syphilis, a new health complication may arise due to the fact that it was not treated earlier.

Can you get syphilis without being sexually active?

You can get syphilis without having sex. Coming into close contact with an infected person’s genital, mouth or rectum could lead you to contracting syphilis.