Can you get an STD without having sex?

Can you get an STD without having sex?

Yes! There are a number of ways that you can get an STD without having sex.

In this article, we are going to talk you through some of the ways that you can get STD, other than having unprotected sex.

Some of the most common ways that you could get an STD without having unprotected penetrative sex include: 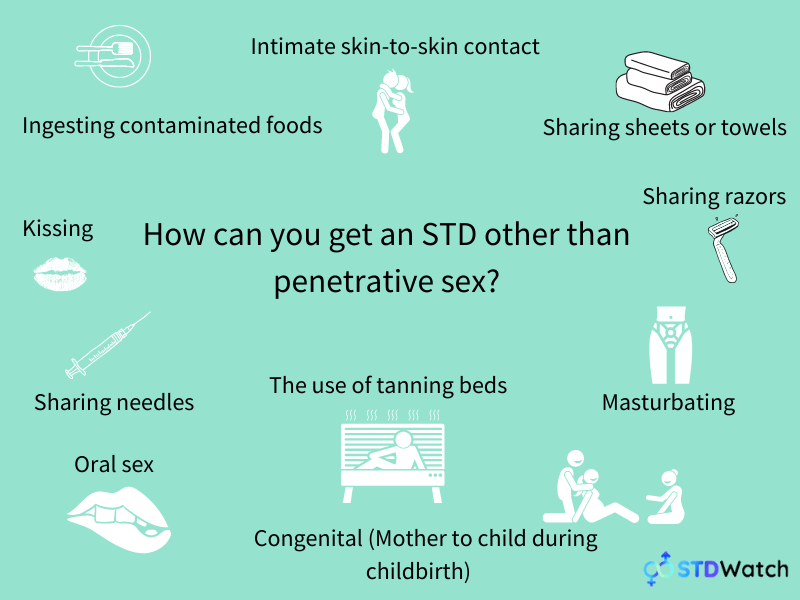 The vast majority of us may believe that unless you are having unprotected penetrative sex, there is no way that you could be at risk of getting an STD.

Let's unpack each, including the different types of STDs you can get from each activity.

Believe it or not, you can get an STD from kissing, though it is believed to be a "low-risk" in comparison to having unprotected penetrative sex or oral sex.

Don't be afraid of puckering up, the chances of getting an STD through kissing are relatively low.

If you do notice a blister or sore around someone's mouth, try to have an open conversation. It could be a pimple, but it is always better to be safe than sorry. Do not engage with kissing or oral sex if someone has blisters or sores around their mouth.

Syphilis doesn't always present with symptoms, however it is possible to transmit the bacteria to another person through deep kissing.

Which STDs can you get from kissing?

Many STDs can be contracted via oral sex, whether you are receiving or performing oral sex on an infected partner.

The best methods of protection for oral sex include condoms or using a dental dam. While 85% of sexually active people aged 18-44 have reported having oral sex, according to data released by the Centers for Disease Control and Prevention, a large majority of us wouldn't consider using protection during oral sex.

Which STDs can you get from oral sex?

Intimate skin-to-skin contact can include anything from a nude cuddle to a massage,  or non-penetrative sex.

Without the perceived risk of pregnancy, we may believe that it is a less risky form of sex. This is not an attempt to fear-monger or make you feel more worried than is necessary, however intimate-skin-to-skin contact does have some risk attached.

HPV may be transmitted through skin-to-skin contact even if you don’t have any symptoms. There is no cure for HPV, but the warts or cancers it causes can be treated.

Which STDs can you get from intimate skin-to-skin contact? 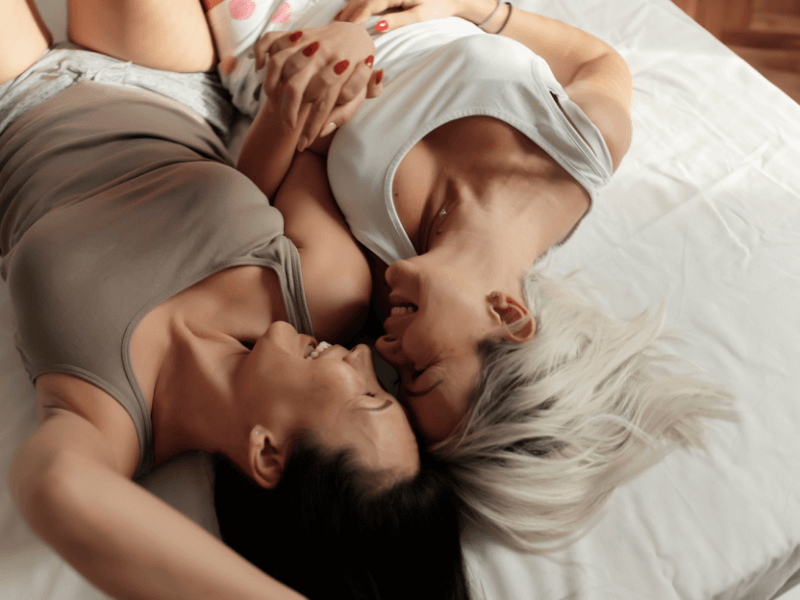 The risk of getting an STD while using your hands is extremely unlikely. Sharing sex toys however does carry a risk.

It is possible to get chlamydia, syphilis, herpes, bacterial vaginosis and shigella through sharing uncleaned sex toys.

Avoid sharing sex toys, and ensure that you regularly clean your toys with cleaners that are specifically made for them. Planned Parenthood recommend placing a condom on penetrative toys.

Which STDs can you get from sharing sex toys?

It is possible to get an STD through sharing needles. Coming into contact with infected blood may lead to the transmission of hepatitis B, syphilis, HIV and/or AIDs.

If you have shared needles with someone, you should undergo an STD screening as soon possible to rule out transmission.

Which STDs can you get from sharing needles?

In the same way that it is possible to get an STD through sharing needles, sharing razors also poses a risk, though it is a small one.

HIV and hepatitis A, B, and C may be contracted through sharing razors. Buy and use your own shaving razors to lower the risk.

Which STDs can you get from sharing razors?

Hepatitis A (HAV) may be transmitted through the ingestion of fecal matter.

According to STDcheck.com, "if someone uses the restroom, doesn’t wash their hands, and begins prepping your food or making you a drink, you can end up getting an STD from your food, which you can then transmit sexually."

Which STDs can you get from ingesting contaminated foods?

Crabs, which are also known as pubic lice and scabies can be passed from one person to the next when sharing sheets or towels, though crabs and scabies can live in a number of different environments.

Read: STD bumps | What do they look like & what do they mean? which will help you to identify which lumps, bumps and rashes to look out for when it comes to your sexual health.

Which STDs can you get from sharing sheets or towels?

The use of tanning beds

Molluscum contagiosum may be an STD you have never heard of!

Molluscum contagiosum is a viral skin infection that results in round, firm, painless bumps.

According to Mayo Clinic, molluscum contagiosum spreads through contact with an infected person or a contaminated object. Though painless, the small bumps might itch. Scratched bumps can spread infection to surrounding skin.

The viral infection can live on surfaces for a short amount of time, notably warm places such as tanning beds. Though this is rare, it is something to look out for!

Which STDs can you get from using tanning beds?

Congenitally (Mother to baby during childbirth)

STDs can be passed from mother to child during pregnancy and/or childbirth.

According to the Centers for Disease Control and Prevention: "STDs can complicate your pregnancy and may have serious effects on both you and your developing baby. Some of these problems may be seen at birth; others may not be discovered until months or years later."

STD screening is part of the journey for most expecting mothers, so do not worry. If you do have an STD, this will likely be diagnosed and treated in the early stages of your pregnancy journey.

Which STDs can be passed from mother to baby during childbirth?

What should I do if I think I have an STD?

If you think that you have an STD, it's important to get tested as soon as possible. The sooner you start your treatment plan, the better the outcome.

We have compiled a list of the best at home STD testing options if you would prefer to get screened from the comfort of home.

How do you put on a condom?

Read: How to put on a condom plus facts & myths

Can you tell if someone has an STD by looking at them?

More often than not, it is not possible to tell if someone has an STD just by looking at them.

Most STDs are asymptomatic so it is very possible that the person who has the STD does not know that they do.

Always use protection and have open, honest conversations with your sexual partners to stay safe.

If my partner has an STD, does it mean that they cheated on me?

The important thing here is to get tested and treated if one or both of you has an STD. Next, it's time to talk sexual history. Be as open and honest as you can, even if it feels a little tough to talk about. You got this!

Read: STDs in women: Here’s everything you need to know

Read: STDs in men: Here’s everything you need to know