Read on to find out everything you need to know about thrush in men including causes, symptoms, treatment and prevention.

Yeast infections are caused by an imbalance in a fungus called Candida albicans.* *Candida albicans is a natural organism that lives in or on our bodies.

Thrush is caused by the fungus Candida albicans. Normally, candida lives in balance with other microorganisms in our body**,** but it is possible for Candida albicans to become imbalanced in the body when good bacteria in the body is depleted.When Candida albicans becomes imbalanced, it can lead to thrush affects the head of the penis, the foreskin, the mouth and other areas of the body covered by a mucous membrane.

Causes of thrush in men

If you are healthy, and are not on any medications, it's important to remember that Candida tends to grow in warm and moist conditions according to the NHS.

Make sure that you regularly wash your genitals and dry them thoroughly afterwards, do not use heavily perfumed soaps or lotions. You should also opt for underwear make of breathable, absorbent fabrics, such as cotton. 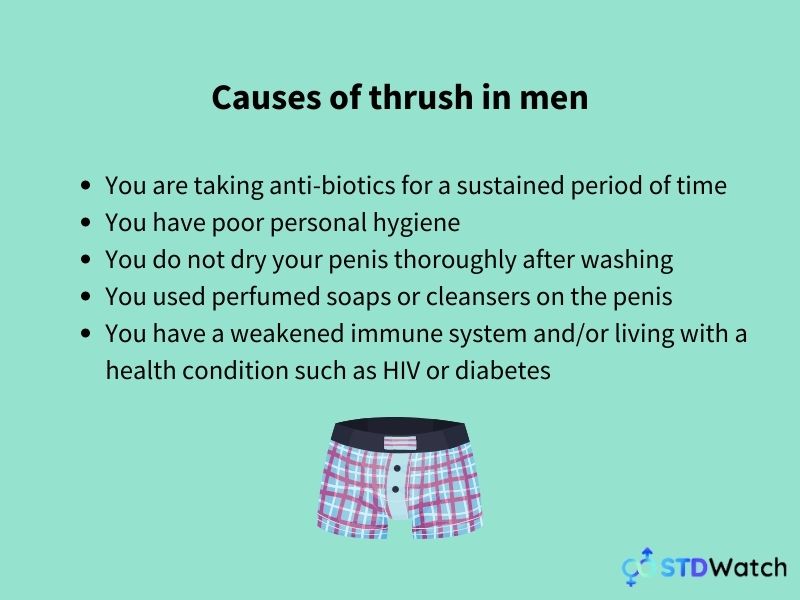 Symptoms of thrush in men

Some of the common symptoms of penile thrush in men include:

Some of the common symptoms of oral thrush in men may include: How does a man get thrush?

Thrush is not classified as a sexually transmitted infection because it can be transmitted without having sex.

In saying that, the fungus associated with thrush, Candida, may be be passed via sex, and sexual activity can make thrush symptoms worse.

The causes of thrush as outlined above, such as poor hygiene, over-washing, the use of anti-biotics, having a weakened immune system are the leading ways that a man may get thrush.

How common is thrush in males?

Thrush is a common issue in males.

According to the Centers for Disease Control and Prevention, thrush incidence declined during 2008–2013 and then stabilized at approximately 9 cases per 100,000 population during 2013–2017.

The CDC states that improvements in thrush numbers related to healthcare delivery improvements such as those involving catheter care and maintenance. Increases in incidence for certain surveillance areas may be due to increases in the number of candidemia cases related to injection drug use, which has recently been re-emerging as a risk factor for candidemia.

What happens if thrush goes untreated in males?

If left untreated, a yeast infection may enter the bloodstream. This is known as candidemia or invasive candidiasis.

An untreated yeast infection in men may also lead to a condition called balanitis. Balanitis is an inflammation of the foreskin or head of the penis.

Can a man give a woman thrush?

A man doesn’t necessarily give a woman thrush, since candida is present in all human beings. But although unlikely, it is still possible for sexual partners to contract candidiasis from each other.

Some of the most effective ways to prevent thrush include:

7 min read
Low Testosterone in Men - Causes, Symptoms & Treatment
Testosterone imbalances can result in many symptoms and health problems. In this article, we discuss everything you need to know about low testosterone in men.
Mar 25, 2022
7 min read
What Does It Mean If A Man Has White Discharge?
Noticing white penis discharge can be worrying, since it’s not something that most men experience frequently. Here are causes of white discharge from penis.
Mar 25, 2022