Yellow discharge from penis: What you need to know

Seeing discharge coming out of your penis can be concerning, and it’s normal to wonder if it’s a sign that something is wrong with your body. In some cases, penile discharge may not represent a big problem, whereas in others, it can definitely point to an underlying condition.

It’s important to pay attention to its characteristics and accompanying symptoms so that you can take the best possible care of your body.

Let’s discuss some of the things that can cause yellow discharge from your penis, and when it’s time to go to the doctor.

Penile discharge is usually defined as any substance coming from the penis that isn’t urine, semen, or pre-ejaculate.

Causes of yellow discharge from penis

Some causes of yellow discharge from penis include:

Gonorrhea, caused by bacteria Neisseria gonorrhoeae, is a common STI. This infection is  completely asymptomatic for a large percentage of people affected — especially men. But according to the Centers for Disease Control and Prevention (CDC), it can also cause symptoms that include:

Chlamydia is caused by the bacteria Chlamydia trachomatis, and it’s spread through unprotected sexual contact. Chlamydia is asymptomatic in many cases; according to the UK’s NHS, at least half of all men infected with chlamydia are completely asymptomatic. But when it does cause symptoms, these can include:

Smegma results from a combination of dead skin cells, sebum, and water. It’s more common in uncircumcised males, where it collects under the foreskin; however, smegma can affect any man. It has a thick consistency and it can be white or yellowish in color. It can also generate a foul smell.

In small amounts, smegma helps lubricate the head of the penis, and keeps it moist to prevent irritation. An excessive buildup of smegma, on the other hand, can facilitate the growth of harmful bacteria and other dangerous pathogens, such as human papillomavirus (HPV). This can increase your risk of irritation and infections. According to the American Cancer Society, excessive smegma is a risk factor for penile cancer.

Urinary tract infections (UTIs) are far more common in women, but they can also affect men. Risk of UTIs in men increases with age. According to Harvard Health Publishing, this happens because many older men have enlarged prostates. This enlargement slows or blocks urine flow from the bladder, which allows harmful bacteria to grow inside the bladder.

In most cases, UTIs develop after bacteria that naturally live in the digestive tract (such as E. coli) enter the urinary tract, leading to an infection.

Symptoms of a UTI in men can include:

Urethritis is an infection of the urethra, which is the small tube that connects your bladder to your urinary meatus, or the opening of the penis through which urine exits your body. Urethritis is most commonly caused by Neisseria gonnorhoeae (gonococcal urethritis), but it can also be caused by other pathogens, such as chlamydia, herpes, Mycoplasma genitalium, adenovirus, E.coli, herpes virus, streptococcus, and even as a symptom of reactive arthritis (non-gonococcal urethritis). According to an article published by the American Academy of Family Physicians, gonococcal and non-gonococcal infections can often coexist.

Symptoms of urethritis can include:

Balanitis is a condition characterized by inflammation of the glans or head of the penis. According to the Cleveland Clinic, balanitis is most common in uncircumcised males — but it can affect circumcised men, as well. It’s also more common in young children under the age of 4, but again, it can affect older males. Phimosis is also a risk factor for balanitis.

Symptoms of balanitis include: 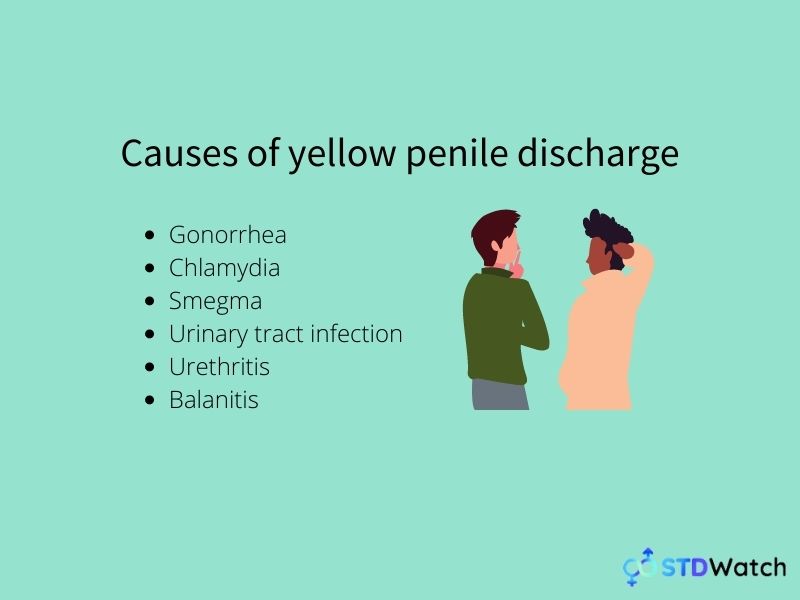 Since yellow discharge from the penis typically points to an infection, it’s always a good idea to seek guidance from a healthcare professional. They will be able to perform a thorough physical examination and, in some cases, take a sample of the discharge in order to reach a diagnosis.

If your yellow penile discharge is caused by an infection (STI or otherwise), your doctor will likely prescribe a course of antibiotics. It’s important to follow your doctor’s instructions and take the full course of the medication, even if your symptoms resolve before the treatment is complete.


Learn more with our other articles

STDs in men: Here’s everything you need to know

Written by Hannah Kingston - Updated on August 4, 2021  Medically reviewed by Dr Andrea Pinto Lopez, M.D. Wondering if STDs in men are different to STDs in women? Or which STD most...

Chlamydia vs. Gonorrhea - What’s the difference?

Written by Andrea Pinto on August 4th, 2021 Chlamydia and gonorrhea are both common sexually transmitted infections (STIs) that affect many people around the world. And although these...