How does a HIV test work?

HIV causes AIDS and interferes with the body's ability to fight infections. Today, we talk you through everything you need to know about HIV tests and how they work.

How does a HIV test work?

HIV is a virus that attacks the immune system. HIV causes a condition called AIDs (acquired immunodeficiency virus) if it is not treated.

Currently, there are three types of HIV tests available for detecting the presence of HIV, also known as the human immunodeficiency virus.

There are three types of tests available which include, antigen/antibody tests, antibody tests and nucleic acid-based tests (NAT).

The sample needed for a HIV test is usually blood or oral fluid. HIV tests can also be performed using urine as a sample.

Sample required: Blood, drawn from the vein or via finger prick.

Antibodies: a blood protein produced in response to and counteracting a specific antigen. Antibodies combine chemically with substances which the body recognizes as alien, such as bacteria, viruses, and foreign substances in the blood. After they “tag” their target, they can neutralize it themselves or signal other immune cells to attack and destroy it.

Antigen: is any substance that causes your immune system to produce antibodies against it. An antigen may be a substance from the environment, such as chemicals, bacteria, viruses, or pollen. There can also be antigens produced within your own body, which are called “self-antigens” or “self-proteins”.

When the body is exposed to viruses, such as HIV, your immune system will produce antibodies, in response to the antigens that have been activated by the virus.

p24 is a component of the HIV virus; if you have HIV, there will also be p24 antigen in your blood which can be detected by an antigen test. This antigen is present before your body starts producing antibodies, which is why this test can be used for early HIV detection. This type of HIV test is common in the United States.

Sample required: Blood, drawn from the vein or via finger prick.

Antibody tests look for antibodies in the blood. Antibody tests that use a blood sample taken from the vein will provide faster results than a finger prick or rapid test.

A NAT can tell whether a person has HIV, as well as their viral load (how much virus is present in the blood). A NAT is the fastest test for detecting HIV in the blood, however it is also the most expensive. A NAT is not a routine screening test for individuals unless they are experiencing symptoms or they have been put at high risk for exposure to the virus. 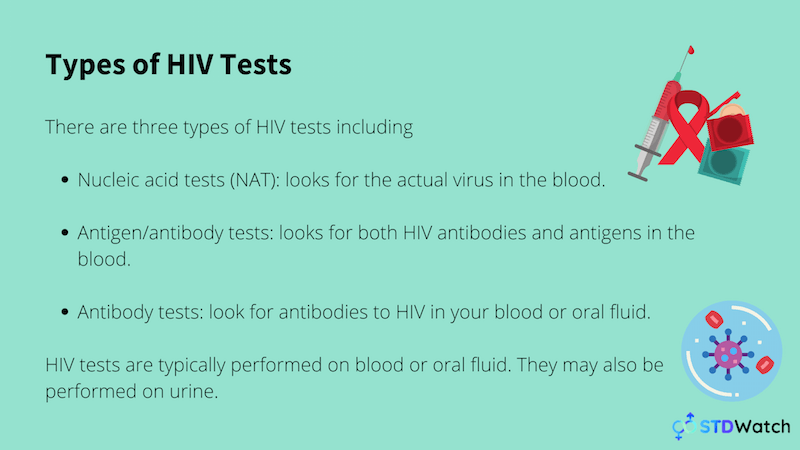 Of course, it is important to remember that there are a variety of signs and symptoms of HIV that a person may experience. The signs and symptoms will depend on which stage of the disease the person is currently in. The stages of HIV include:

As mentioned, the first signs and symptoms of HIV infection mimic or feel like flu-like symptoms. Early symptoms can last just a few days or progress over a number of weeks. Some people will be asymptomatic, meaning that they don’t showcase any symptoms at all.

If symptoms do occur, some of the most common symptoms include:

If these symptoms sound familiar, do not feel worried right away. If you feel that you have been exposed to HIV, however, it is important to get tested as soon as possible. 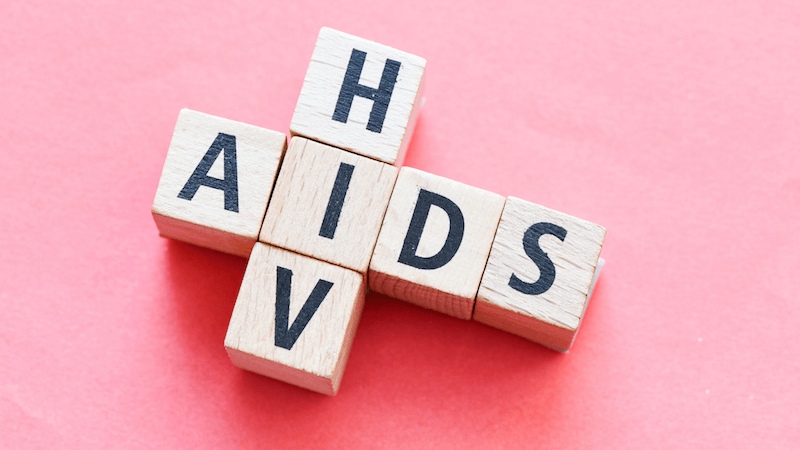 It is possible to test for HIV from home or a private location using at home HIV tests.

According to the Centers for Disease Control and Prevention “The availability of HIV self-tests in the US may help increase awareness of HIV infection for people who wouldn’t otherwise get an HIV test.”

Currently, the only FDA approvedt.

This test was approved by the FDA in 2012 for sale in stores and online to anyone age 17 and older.

The kit does not require sending a sample to a lab. It tests fluid from the mouth and delivers results in 20 to 40 minutes.

There are also a number of antibody/antigen and antibody at home HIV tests on the market that can be easily accessed online.

You can get an at home HIV test from the following providers:

For a STD test price where we compare the market so you can get the most cost effective option.

Some of the greatest risk factors for HIV according to the World Health Organization are: 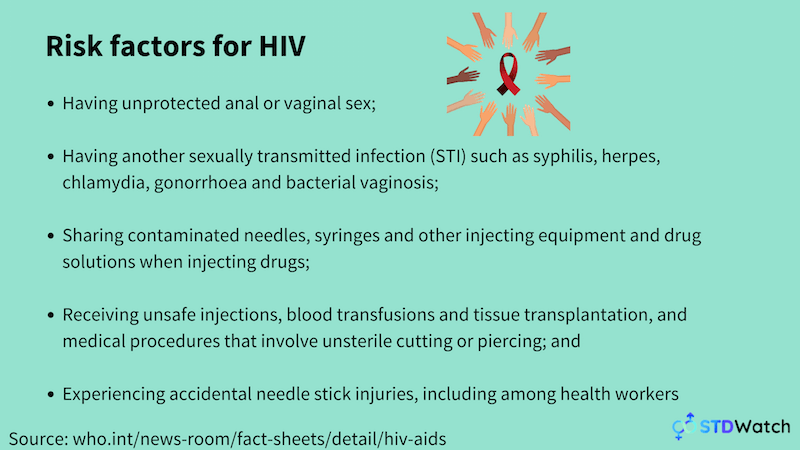 According to the Centers for Disease Control and Prevention, the most common ways of getting HIV in the United States is by having sex or sharing syringes and other injection equipment with someone who is infected with HIV.

Yes. There are two types of HIV test that you can take yourself including:

How long does it take for HIV to appear on a test?

It depends on the type of test you take:

There is no HIV test that can detect HIV immediately after infection, right away.

There is no way of truly knowing that you have HIV, however, if you identify yourself within any of the risk factors listed above, and begin to experience flu-like symptoms, you should take a test as soon as possible.

**What should I do if I am experiencing the symptoms of HIV? **

If you are experiencing the symptoms of HIV: