Everything You Need To Know About Estrogen

What does estrogen do? Let's talk about the function of estrogen in the female body, how it makes you feel, the benefits and if it can lead to weight gain.

What does estrogen do?

Estrogen plays a role in:

That’s not all though! Estrogen also plays a key function in:

Estrogen promotes organ functions, such as:

Estrogen is one of the most well known female sex hormones.

Estrogen plays a number of key functions in both females and males, though males produce a much smaller amount than women. Estrogen is made from cholesterol. (Cholesterol is a fat molecule that occurs naturally in the body, you may have heard of good and bad cholesterol before!)

There are four well-known types of estrogen. These are often referred to as estradiol.

The four different types of estrogens have different functions during different life stages. When we refer to “weak estrogens” - we are talking about those that do not have a major impact on the body due to the fact that they “weakly” bind to estrogen receptors.

Hello Clue do a great job of describing estrogens and their receptors:

“Hormones facilitate communication between cells around the entire body. Cells that have receptors for estrogen have functions which are activated or deactivated by it. Think of estrogen as a key, and estrogen receptors as a lock—together they make your body systems work.”

**Here are the four major types of estrogen as well as where they are produced: **

Estrogen is not exclusive to females.

Males, trans-women, children and post-menopausal women also have estrogen in their bodies. For those who are not releasing eggs every month, estrogen is made in other areas of the body, such as the adrenal glands, fat tissues, bones, skin and the liver. Adult males produce estrogen in the testes. 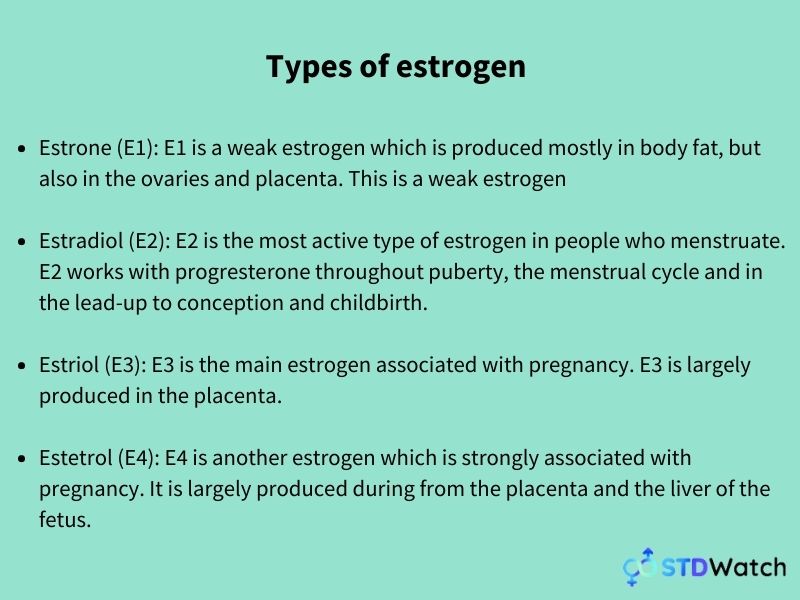 How does estrogen affect the body?

It is pretty well-known that estrogen plays an integral role in the development of secondary sex characteristics, such as those that develop during puberty.

A lot of people do not know that estrogens also affect numerous other parts of the body such as the:

Estrogen plays a key role in menstruation. In the event that a female egg is not fertilized, estrogen levels drop drastically and menstruation begins.

If the egg is fertilized, estrogen will work with progesterone to stop ovulation during pregnancy and begin the process of thickening the uterine wallso the egg can implant and begin to grow to an embryo.

In pregnancy, the placenta produces estrogen to help futher thicken the uterine wall. Estrogen will also play a role in the production of breast milk and lactation.

High estrogen levels are associated with a condition called endometriosis.

How does estrogen make you feel?

Estrogen may not make you feel any sort of way! It’s very common to miss the signs of high and/or low estrogen.

There are a number of clues that may tell you that you are living with a hormone imbalance, such as:

As all hormones fluctuate and change on a monthly, weekly and even daily basis, it’s important to note that there is a difference between PMS and a hormone imbalance. Estrogen levels change a lot during your monthly cycle, and throughout your life. 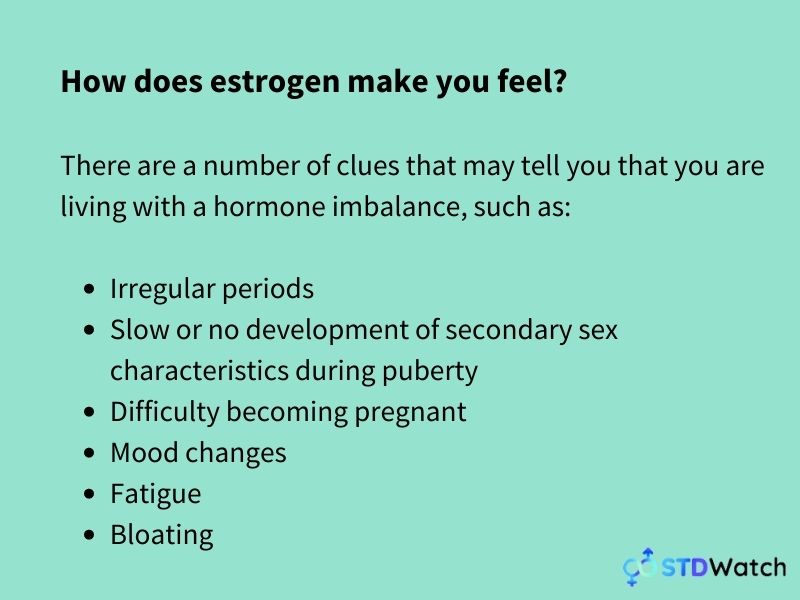 If you are experiencing the symptoms of high estrogen or symptoms of low estrogen, it’s important to speak with a healthcare professional or take a hormone test so you get the answers that you need, and fast.

What are the benefits of estrogen?

Estrogen has a number of benefits such as:

Estrogen plays a key role in the breakdown and rebuild of strong, healthy bones. Estrogen is sometimes used to treat bone loss and/or osteoporosis.

Estrogen promotes good vaginal health by promoting the development of lining, tissue, and pH balance. Estrogen helps to ensure that the vagina is lubricated during sex and childbirth, and lowers the risk of atrophic vaginitis (inflammation and itchiness of the vagina) as well as vulvar atrophy (dryness and soreness of the vagina as well as urinary incontinence).

**Controls the symptoms of menopause **

As mentioned, estrogen levels change and fluctuate over time. Estrogen naturally begins to dip as you approach the menopause.

The symptoms of the menoapuse may include:

Estrogen is often used by doctors to help combat the symptoms of the menopause.

During the reproductive years, women get additional fat deposition in the pelvis, buttocks, thighs, and breasts to provide an energy source for eventual pregnancy and lactation.

In menopause, a woman's estrogen levels are inversely related to her weight. In a study of newly menopausal healthy women over a four‐year period, women showed an increase in weight and body fat (primarily as visceral adipose tissue), which coincided with a drop in estradiol levels and a decrease in physical activity and energy expenditure.